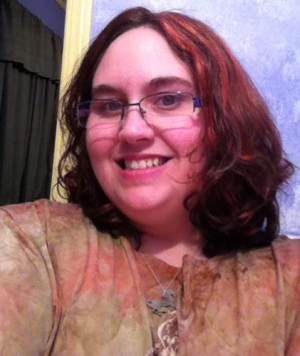 Back in high school I begged my mother to let me dye my hair to look like Courtney Cox’s hair in Scream 2. No joke. This was one of my biggest desires in life at the time. Eventually, I talked her into this idea. Red streaks. I was so excited. She informed me that I could do it as long as it wasn’t like blood red. The funny part of this is because my hair is super brown, almost black, in order for the dye to show up it had to be brightened and looked blood red. My cousin and I made jokes about how red my hair would be when really it was the perfect shade of red. A brown and red mixture that looked more like black and red. I happened to think it was the best thing ever.

After a while, I let the red grow out. I also let my hair grow out. For years I kept my hair so long that I would make two braids and pull those into a ponytail to remain cool. I have to admit if I ever allow my hair to get that long again that is how I would maintain my hair. This made the curls and waves easier to tolerate and less painful to brush. And almost three years ago around tax season, I decided I was keeping enough money out to go to a salon and get a haircut and my hair streaked.  I had no idea what I truly wanted besides red streaks once more and for most the inches to go as far away as possible.

By the time the hair stylist was finished, I was left with a ponytail as long as my cat Oliver when he was laying down.  My hair was a mixture of brown and red, but not the Eva Marie red I envisioned.  Somewhere between trying to decide what I truly wanted that is the only thing I knew I wanted for certain.  An Eva Marie red.  She is the reason I had this urge to head back into a salon in the first place.  A female wrestler.  I still have no regrets for stepping back foot into the salon.  My wallet might, but I don’t.

After a while I quit going though because no matter what shampoo I used my dye was not staying in as long as I felt the dye had the potential to.  I wasn’t sure what was wrong, but I was willing to give another hair stylist control.  She informed me that despite thinking I had not had my hair bleached the previous stylist had been mixing in some bleach.  I asked her if possible to make the red as dark as possible without bleaching my hair and stuck with the streaks even though dying my whole head would have been cheaper.

Afterward, and upon looking at my bank account, I decided maybe that wasn’t a bad idea.  Maybe I could pull off being a full blown redhead!  After all, my nanny and my Aunt Michelle are natural redheads so why not.  After finally making the appointment I was shocked to see that the dye was not as blood red as I had been used to seeing in the past.  In fact, the dye was purple.  Apparently when mixing up enough red to dye my entire head of hair the dye is purple.  Weird right?  That’s what I thought too at first.  My stylist, Katie, assured me that it was normal.

And for a while I loved being a redhead!  I was a redhead for over a year.  But there was this part of me that never dyed my hair what most people dub as “weird” colors that wanted to explore other colors.  So we started messing with purple.  My hair was far too dark for it to stand out.  In fact, no one could really see the color so it was my own little secret at first.  Then we managed to get some peekaboos in there with some well placed bleach.  By the time that my nanny passed I had some purple poking out and soon realized that life is far too short not to do what I wanted to do with my hair.

Needless to say I found myself contacting my stylist and asking her how much it would cost for me to go purple.  After finding out I started down the path to have purple hair by the time Walker Stalker Con came around last year.  The best part was being around like minded people in terms that your hair does not have to be brown, black, blonde, or red to be normal.  The other best part was having Josh McDermitt actually lift up my hair and tell me that my hair was cool.  When the actor that plays Eugene on The Walking Dead tells you that you have cool hair life is good.

Since then I have added blue to my purple every now and then went teal, pink, purple, and blue with black on the top.  And that somehow lead to blue and black.  All the while though,

I kept thinking of how my Aunt Janice told me I would look good with blue hair ever since I wore a bright blue wig for Halloween one year.  And finally, two salon visits ago I decided I want to go blue completely.  This was after dying part of my hair black.  Bleach and I are friends for the time being, but the blue has come in quite nicely.

All these changes are due to the red giving me the courage to try new things.  Plus, my hair is one of the aspects I can control in a world full of chaos.  The bonus is being able to go to work and have a boss who does not care what my hair color is as long as I do my work.  I wish that was true norm in society.  Maybe one day.  Thankfully, we are inching closer to that day so that everyone out there who has the decide to go with a so-called “weird” color can.  And who knows, maybe one day that will be the norm.