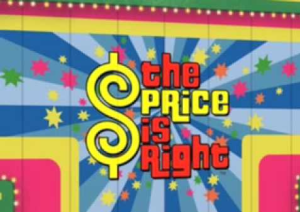 Last night, for a longer time than I care to admit, I became best friends with a trash can. Vomiting is fun for no one. I knew immediately I did not want to function today like I should. Thus I took one of my sick days for once instead of trying to keep going. It has taken me until about eleven o’clock this morning to feel like I don’t have to be near side garbage can. Feeling betterish has evolved to feeling better. The only benefit of not being at work today is that I get to watch The Price is Right and hopefully catch up on a thing or two, as long as the garbage can and I do not become friends again. Fingers crossed there!

Due to the sickness though, there is something about this show, even now when I have plenty of DVR options, that makes me want to watch it when I’m at home sick. Maybe this is because of the memory being permanently engrained in my head of my papa and I watching the show, or the fact it is like the ritual in a way. A rite of passage if you will.  You get sick. You curl up on the couch with your blanket and you watch The Price is Right. My papa is the one who got me into the show during the days of Bob Barker before I started elementary school. At the time I would curl up in his chair with him and watch the show with him every morning.  And of course on any sick day I had away from school.

In fact, one time when I had to go to the doctor, and he was in the hospital, I begged my dad to take me to visit him.  Once there we stayed for the whole hour and I laid in the bed with him and we watched Bob and the various models help award prizes to the various contestants.  I’m so grateful to have this memory with him now since he is sadly no longer with us. But because of this, I always makes me watch the show with a childlike gleam.  I get just as excited for the contestants during the showcase showdown as they do.  I want them all to be able to walk away with something.  And if they get to be a double showcase winner that is a good day!

After all, I still wish I were able to be in the audience and called up to the front.  I just know I could win whatever game they threw at me.  There is a part of me that also wishes I could have taken my papa there somehow and he could have been rooting me on from the crowd.  He clearly would have been the loudest and proudest.  I think this is just a desire from people of my generation though in general.  We all believe that we would have kicked butt on whatever game show we went on.  After all, I could have done just as good on The Price is Right as Double Dare back then.

The games I have always wanted to play the most on The Price is Right are Plinko, Punch-A-Bunch, Cliff Hangers, or One Away.  The first two because in a way you are guaranteed to walk away with something.  Namely because I refuse to believe I would be so bad at Plinko I would hit zero every time.  And I am also determined I would be able to win all the chips to give me a greater chance of walking away with more money than less.  Punch-A-Bunch of course lets me punch things and win money!  That’s a win-win!  Cliff Hangers would let me yodel along with the hiker, but not for long since I want to win, and I would win a car with One Away.  I was always oddly good at that game from my couch so I think I would be good at it on the show.

This of course is one of those dreams that might be a bit of a pipe dream.  I do not think I’m alone with this dream though.  Plus, there is a whole new generation that gets to share in this dream with us.  That is kind of the beauty of this show.  Whole new generations are growing up on these games that we once grew up on once upon a time.  I want to believe that we all will get our turn on the show somehow.  Even if there is a whole new generation who believes that is no other host than Drew Carey.  While that is weird to me, watching this show while feeling under the weather is some odd right of passage.  And I for one hope this rite of passage is one that lasts a very long time.