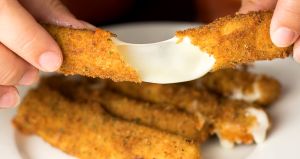 I think in life we all try to be a Lucy.  Maybe this is because I was raised on I Love Lucy and all these other older shows because of Nick-at-Nite.  I’m not really sure.  But I’m running with this!  So in my life as Lucy I feel that I have two Ethels.  They are both going to the convention with me this weekend, which is probably a scary thought for all the convention goers this weekend.  That is not the point though.  Yesterday, one of my Ethels and I went to go see Boo 2: A Madea Halloween and out to eat beforehand.  Now, we choose Panda Express.  Toward the end of our meal I admitted that I almost pulled us into Arby’s because cheese sticks are important.

My friend gets all wide eyed and agrees.  Then I ask how bad it would be, because we had forty-five minutes until the movie, if we went to get cheese sticks and then go to theater and eat them in the car.  Our dirty cheese stick shame if you will, which I was informed there is no such thing as cheese stick shame.  So there we were in the car, driving through their drive thru to get two six piece orders of cheese sticks.  The funny part is the car behind us just order a four piece.

At this point we wondered how anyone could be content just eating four cheese sticks, but were amused and wondering if Arby’s thought they were having some weird rush of cheese sticks and needed to cook a ton of them all of a sudden.  But we received our cheese sticks and were a little sad that there were not more people to people watch at the theater from the comfort of my car and the new Pink CD soundtrack in the background.  This did not stop us from making up stories about the four people we saw in the parking lot though.  And this is when our talk took a rather humorous turn.

Me: What do you think that guy is seeing?

Her: I think he is here for a date.

Me: I think he is going to the races because of that checkered flag hat of his.  Not sure about his bright salmon neon shirt.

Her: Oh maybe he is meeting a dude here.

Her: He does not have style.

Me: I’m assuming not all gay guys have style though.  Oh look!  He’s coming back out.

Her: Tinder date gone wrong!  Whoever did not look like their profile!  Abort the mission!

Me: Whoever must be very ugly.

Her: I’m like a black widow over here with these cheese sticks.  I should make a post about how I’m having my first real relationship and it has only lasted ten minutes because I’m about to devour my prey like a black widow does in the forest.

Me: You should….hey that dude is moving his car.  And you know maybe he is going to see It and is here on a bromance date.

Her: So we have taken him being gay off the table in our scenarios.

Me: We can keep that scenario if you want because we really don’t know.

Her: Orgasms.  Six little orgasms in my mouth.

By this point the two of us are having full blown relationships with our cheese sticks and a family comes out and is passing in front of our car.  The interesting part of this is the fact that this family consisted of three little girls and their father.  We decided ultimately this guy is an awesome dad.  Not only did he probably sit through the My Little Pony movie, but he gave his wife time by herself and spent quality time with his children.  And we are assuming he has a wife because he was wearing a wedding ring and most of the time guys don’t exactly wear those for fun.  But seriously he is like super dad and super husband.  More guys should be like this awesome theater dude!

Ultimately, before we managed to make ourselves stop devouring the food that was deep and real, to steal one from Grace Adler, we decided that more people should have cheese sticks as good as the ones available at Arby’s for moments where you just need a damn cheese stick.  Though now I have to admit I wonder if the movie theater we went to had delicious cheese sticks too.  The other has cheese sticks but they were not even close to being the ones you can nab from Arby’s.  Fast food chains need to up their game clearly.