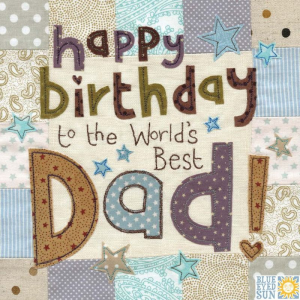 Sixty years ago today an incredible man was born on Friday the 13th.  My horror loving heart has adored this fact for about twenty-five years now. This, of course, is not the point. Instead I write about a milestone that my humble father does not believe is a true milestone in life. Instead of a big dinner, or party somewhere, I am writing about a man that has truly shown me what it means to always be there for someone and put others before themselves. Let me start out by saying I’m not choosing this method as a way of celebration because I do not believe he deserves a HUGE celebration somewhere, but he has insisted this is something he does not want.  I’ve decided he wins this round, but seventy will be another story all together.

When I was younger, my mother used to tell me all the time that when I was a baby I would get on her nerves with the amount of times I affectionately looked up at her and said dada. This annoyed her because I was constantly with her and not so much with my father. After all, my father was constantly working to support our family. As a baby my hours were determined by whatever shift he was working that particular month. I consider this the beginning of my odd sleep patterns, but the truth is I wouldn’t have this any other way. At least I don’t think I would have. I mean, I was a baby when my odd habits began.

As I grew my daddy’s girl mentality did not waiver. I constantly was bugging him to play basketball or baseball with me, go swimming, or take me to the park. A park that had that one of those slides that burned the hell out of the back of your legs during summer because of the material they used to construct it. That same park of course had a merry-go-round too. I look back at that park in my head and think about how my dad was always waiting at the bottom of the slide for me.  He was always behind a swing set pushing me even when he had worked some obscene amount of hours and just wanted to be able to go home.  But he did that for me because truth be told there was nothing he would not have done for me.  This still applies today.

Six Flags was also a huge part of my memories.  My father used to work for Austell Box Board once upon a time.  Their employee appreciation day was always such a big deal for us when I was younger.  I learned to brave so many roller coasters with him, and cried just about every time I road a new one.  This of course was followed by cheers and begging him to get in line with me just one more time to ride said coaster again.  I also remember having such a fun time with him anything a pop up carnival appeared or the fair in general.  His goal was to always stop somewhere so we could have fun.  He even paid some insane amount of money to win me a giant stuffed white ape with bright red boxing gloves.  This is why I still truly appreciate when he brings me random stuffed toys from the claw machines at various places throughout town.

Amusement parks were not the only thing that kept me occupied though.  The movies have become a staple of our relationship over the years.  Lord only knows how many movies I have made him sit through that he felt lukewarm about.  If I remember correctly I’m positive he fell asleep during The Baby-Sitter’s Club movie.  Or was that Harriet The Spy?  Maybe it was both.  I still have to nudge him from time to time at various films to make sure he doesn’t fall asleep on me.  The one day of the year I know we will be at the theater is on Halloween.  We started this odd father-daughter tradition back in 1999.  Almost twenty years is not bad to have only missed one year.  In our defense there were literally no new horror films out that October, which was disappointing on a whole other scale so we decided that watching one that is new to us at home counted.

The truth is that no matter where he has taken me over the years I’ve always enjoyed spending time with him.  He has taught me so many lessons throughout the years and I am sure he will teach me plenty more.  What I have learned in recent years though is that time is truly the one thing that never goes out of style.  The time I have spent over the past nine years with my father has been a blessing.  I say that because I feel like the past nine years I’ve truly been able to get to know my father as a friend.  I know that people think our relationship is unorthodox, but I could not imagine my life any other way.  Well, maybe with a husband who understands that no matter what I will always support my father.  And a donkey.  I still want a donkey.

You will have to excuse me.  I get my sense of humor from him. My point is that while life was never perfect, nor is it still, one constant reminds true.  I know my father loves me and that I love him.  I look forward to all the crazy conversations, concerts, and whatever else life has in store to take place between us the next one hundred years.  Oh yeah, this is my way of telling you I’ve found a vampire so you can live forever!  I know, I know, best daughter ever!

Happy Birthday Daddy and cheers to a wonderful Father’s Day this weekend as well.