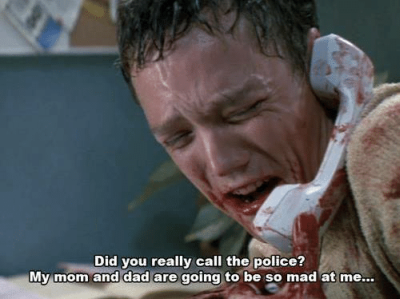 One day a while back I remember being beyond excited upon seeing the script for Scream was available to purchase. This was not how I learned practically the whole script of Scream. No, I watched Scream probably an abnormal amount of times and Scream 2 as well.  In fact, when I was in middle school I had a yellow folder where I wrote an obscene amount of quotes.  This is behavior I look back on and am determined I would have made my way to the counselor’s office on multiple occasions if I were in middle school these days.  With that said I’m going to share some of my favorite quotes from one of my favorite horror films.

Day 9: A movie that you know practically the whole script of – Scream

“What’s the point? They’re all the same. Some stupid killer stalking some big-breasted girl who can’t act who is always running up the stairs when she should be running out the front door. It’s insulting.” – Sidney Prescott

I’ve continued to find this particular quote hilarious of the years.  One reason is because this is one of the most painfully treat sentiments that have ever been uttered in a horror film.  Everyone always runs up the stairs instead of out the door.  In all fairness, a lot of the killers block the door, but when they do not I’ve always wondered why the characters did not bother running out the door.  I will at least give Sidney credit.  As soon as she could run for the door she does.  Though she does get the hell scared out of her by Dewey standing there with the mask and lots of screaming takes place.  The other reason is that Sidney literally runs up the stairs not long after she says this to Ghostface.  Though I do suppose that in her case she could act so the stereotype does not completely apply anyway.

“There are certain RULES that one must abide by in order to successfully survive a horror movie. For instance, number one: you can never have sex. BIG NO NO! BIG NO NO! Sex equals death, okay? Number two: you can never drink or do drugs. The sin factor! It’s a sin. It’s an extension of number one. And number three: never, ever, ever under any circumstances say, “I’ll be right back.” Because you won’t be back.” – Randy Meeks

Out of all the other quotes in the film this one made the most sense to me.  And of course this was the moment that I completely related to Randy.  In many ways I felt like the female Randy growing up.  I was definitely the movie nerd of my group and I knew far too much information about various films, but in particular horror.  The horror section was something I found myself walking down far too many times and I lingered there.  In fact, one time I went to Hollywood Video and stayed there with my friend randomly talking for like two hours to some guy. That is why when I ended up eventually working at Blockbuster Video before they closed my co-workers would point at me when people came in who wanted a good horror film.  I’m also certain that is why my manager let me organize the Halloween wall too.  I went a little overboard with the decorations, but I had a blast.  Oh yeah, I also worked at a video store like Randy but unlike him I was never fired.

Earlier this year I was determined that I was going to have my photograph taken with Matthew Lillard and have him sign our photo together with this phrase.  There is a small part of me that still eventually wants to meet him once more so I can get him to sign that photograph with those words.  Instead the following happened: 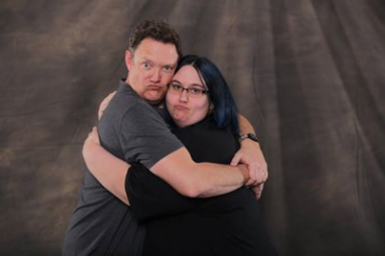 I got my second favorite Stu quote and one awesome picture where I got to duckface for the first and only time in my life.  I think the picture says what my favorite Stu quote says above though.  Plus if I think of it that way I can hear the laugh afterward and him insisting to Tatum that it’s a joke as she bats at him.

This is one of those quotes that has always bothered me on a deeper level.  This is partly because it is absolutely terrifying to think of some psychopath out there who takes certain on-screen murders as a challenge to outdo.  I will admit that it makes Billy’s mother teaming up with Mickey in the sequel that much more interesting though.  One son who claims movies makes psycho more creatives and a pseudo son who wants to blame the movies.  Way to go Mrs. Loomis.

“No, please don’t kill me, Mr. Ghostface, I wanna be in the sequel!” – Tatum Riley

I feel like Tatum says what everyone wants to say during most horror films.  After all what character truly wants to die? Though I do question her desire to live since she thought she could fit through a doggie door.  This is nothing against her size, but seriously why would anyone think that is a good idea?  Just no.

Ultimately, Scream is just one of those films I know like the back of my hand.  It’s a film I could sit and quote for the duration and why I tend to recommend it to others instead of watching it with them.  Hey, at least I know I’m annoying with my quoting right?