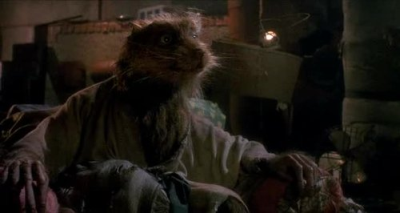 I haven’t had nightmares in forever.  At least not ones that I can remember or vivid.  And in the past two weeks I’ve had two insanely vivid nightmares about rats to the point I woke up.  The first time I sat up in my bed and my heart was beating insanely fast and last night I literally got out of bed and said what the hell is going on loud enough that my dad asked me if I was okay.

The first dream consisted of me seeing a rat crawling over and under the items on my dresser.   This of course creeped me out in the dream because my perspective was from my bed.  Oliver had jumped on the dresser to chase said rat and my eyes diverted down toward my closet.  And at that time I saw this rat hanging from the ceiling as if it had spider-like qualities and could do so, which is the scariest thought EVER, and then it exploded!  I mean chunks flew in the room and insane amount of blood from this rat.  I equate the amount of blood from the elevator moment in The Shining.

As I woke up, I literally sat up in my bed and placed my hand over my heart.  My cat oddly enough was leaning into me and nuzzling my arm as if he wanted to calm me down.  Quite frankly I wanted him to.  I told a friend of mine this dream and let it go.  Until last night/this morning apparently.

I laid down earlier Wednesday night than I typically do.  Most nights if I can be close to sleep by eleven it’s a good night.  But last night I laid down by nine.  I barely stayed awake to watch the show I wanted to view and then I went to sleep.  And all was fine in my dream, which one again took place in my bedroom.  This time I was in my bed and I looked up at the ceiling, same area as before with spider-rat, shiver, and I see a rat on the ceiling peering down at me with something red next to him before hearing now, do it now, release them now.  I hear scurrying in my room and look around the room to see various items in my room moving and that is when I woke up.

I literally got out of bed and looked around my room with the lamp on.  Once I answered my dad and told him it was fine, it took me a second to calm down to a point where I laid back down.  And of course Oliver was staring at me like …..it’s bedtime human get into the bed and cuddles with me.  No rats are in here cause if so I’d kill ’em!  GENERAL MOUSE KILLER TO THE RESCUE!  And even though he has not technically killed a rat, just mice, this was comforting enough to lay down and go back to sleep.

Of course all this got me over analyzing my dreams.  I say this because my friend is probably right in the fact that we’ve had rat/mice issues lately therefore rats are probably deeply embedded in my subconscious that all of them are going to attack/eat me/terrorize me in some way.  However, upon googling I made some discoveries!

Through Exemplore I read a lot of different reasonings.  However, the ones that apply to my life, or I think do at the moment, are the following two:

Dreaming about rats can also symbolize sickness, illness, or disease. In many cases, you or someone you know might have an illness. This dream isn’t a prediction of the future, but rather a reflection of present fears.

I do have an uncle that has been sick for some time.  The stranger aspect of this is my father called this morning to tell me he was in ICU and not doing well.  He was supposed to start dialysis today because they think his kidneys are shutting down.  So I’m currently in this state of ……well that reasoning hits too close to home, you’re an asshole mode while praying that my uncle continues to fight like he has previously.  I’m selfish and don’t want to lose anyone else.  I also don’t want my aunt to lose her husband.

My second reasoning I feel might be the case is the following:

Rat dreams can also suggest that we are fearful of not being accepted. Just like the detested rat, you may be fearful that you will be outcast. We all want to feel love and feel that we belong and if we don’t, this can trigger bad dreams.

This makes sense to me because despite trying not to care what people think the majority of the time, we still want to be accepted.  And lord knows when blogging about personal issues there is that fear of not being accepted.  There is almost constantly a fear of trolls, especially when you have anxiety issues, and you realize how much you yearn for that acceptance even if you want to pretend like you don’t.  That’s just how it is really.

You would think I would have left it alone here, but then I thought maybe I should look up beds!!!  Because my bed has played a huge part in both of my dreams.  And this is what I found on Dreams Cloud:

If you dream of sleeping in your bed, you may be becoming conscious or aware of the fact that you are, in fact, sleeping at the moment, and it could be a precursor to becoming lucid.

Henceforth, I realize I have probably put waaaaaay too much emphasis on my nightmares and that my friend is probably right with her logic. That and now I really want to watch the original ninja turtle movie from the nineties.  Cowabunga, dudes.