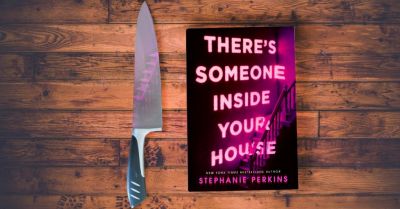 Whenever I go to the library after work I find myself talking more in depth to the librarians. The good thing about the location I go to is that it is in the same building I work. So I tend to take suggestions from my librarians and I’m so glad I decided to pick up There’s Someone Inside Your House by Stephanie Perkins.

This book reminded me of numerous great slasher films throughout the years. Primarily I was reminded of Scream and I Know What You Did Last Summer in many instances. In a lot of ways, this young adult novel took me back to my own youth. I did not want to put this book down. I was constantly trying to find spare time to read There’s Someone Inside Your House to the point I told a good friend of mine that I wished I had started it on a day where I had nothing to do and could have finished the novel in one sitting and hope that Perkins continues to add to the slasher genre.

From the moment the novel opens we realize that something is not right. I immediately had an eerie feeling that the title of the novel is about to come true in a horrific manner and we are not disappointed.

After the initial shock, readers are introduced to our main group of characters, which remind me of the surviving characters in Scream, including our lead character Makani Young. Early on we realize that Makani is fighting to be a different person than the young woman she left behind in Hawaii but finding it increasingly difficult to maintain her unsettling past from her best friends, Alex and Darby, and crush, Ollie Larsson. As she attempts to maintain her secret, various students of Osborne High School begin to drop like flies, one by one. The build up of terror is blended well with learning about the trio of friends as well as outsider Ollie Larsson.

Perkins takes such a simple concept of someone being inside our homes and elevates it in a manner that makes us never want to be alone. Though having someone else there does not necessarily end in success either all of the time. The Strangers continues to blow that theory out of the water.

The murders, while they do not go into extreme detail, paint a picture that are some of the most brutal and grotesque murders I have read in some time. And there is a formula readers slowly pick up on in regard to what chapters contain a murder, for the most part, until the very end. Of course just like in a good slasher film all hell breaks loose at the end. Quite frankly this is a book I actually want to get adapted to the screen. I rarely say such a thing but this book would lend itself to the screen so well.

One of the other aspects of the book I enjoyed was the fact that readers are made to care about characters we honestly shouldn’t care about in the slightest. At first there was a small part of me that wondered if that is merely because the characters who are murdered are in fact teenagers. Ultimately, I don’t believe that’s the case. I believe there are little tidbits we learn about each character, especially when the killer’s motive is revealed, that tugs on our heart strings a bit. The fact that each person had so much lying ahead for them fuels the flames of our sorrow. After all, the most tragic deaths always seem to be the deaths of those around us who die far before their time.

Along with the characters, I wanted more answers. I wondered if we would ever truly learn of Makani’s secret or the killer’s true motive. For a while, the motive is merely speculated by our main group of teens. Each time they inch closer to what the killer reveals.  And none of those reveals were expected.  Our answers ended up being eerie in instances and plain shocking in others, but you’re relieved this is not one of those moments where no motive is the motive.

Ultimately, There’s Someone Inside Your House reminds me of all the great slasher films of my youth.  Much like the initial Scream trilogy, I feel that Perkins could have a trilogy featuring these particular characters in different settings. I know I would gladly read a sequels. Though truth be told, I have to admit this has me wanting to gladly read anything written by Stephanie Perkins. I look forward to going back to her previous works and her future publications.  I just hope she dips her toes back into the waters of the slasher genre soon rather than later.

6 thoughts on “There’s Someone Inside Your House book review”