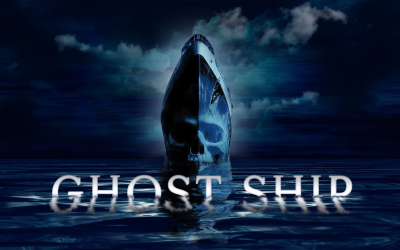 I cannot exactly pinpoint when I watched Ghost Ship (2002) for the first time. What I can remember is that I have not been able to rid the feature from my mind since. The beauty of Ghost Ship is that is not the typical ghost film. The film takes place on boat in the ocean. One would think the added creepiness that can take place within a haunted house would not work on an ocean liner, but that’s the farthest thing from the truth.

The synopsis of Ghost Ship is about a salvage crew, consisting of Captain Sean Murphy (Gabriel Byrne), Maureen Epps (Julianna Margulies), Greer (Isaiah Washington), Dodge (Ron Eldard), Munder (Karl Urban) and Santos (Alex Dimitriades). Upon celebrating a recent success at a local bar, a weather service pilot by the name of Jack Ferriman (Desmond Harrington) approaches the salvage crew and insists that there is a mysterious vessel adrift in the Bering Sea. Upon explaining to the crew that they can claim the boat as their own if they are able to bring the ship to port the crew immediately goes out on their salvage tugboat, Arctic Warrior. Once discovering gold upon the missing passenger ship, the crew decide to take some of the gold for themselves, but leave the ship behind.

Why leave the ship? Because a series of bizarre events begin to take place the longer that the crew remains on-board the ship. Instead of escaping the voyager, slight spoiler alert, the Arctic Warrior explodes not only killing a member of the crew, but also leaving the other members of the crew standard at sea. Instead of leaving well enough alone, the crew begins to slowly realize that there are far more demonic spirits at work than meets the eye. The closer the crew becomes to discovering what is going on aboard the ship, the more they realize that there are less of them to piece the puzzle together. As the plot twists are slowly revealed, one wonders how on earth will be possible for anyone to survive the events set into motion.

Despite that we do see clichés within the film, such as hanging corpses when doors open and various ghosts popping up in various places, there is fresh material to enjoy about this feature as well. In fact, the opening is one of the best openings in horror history. Furthermore, the opening is one thing that made me actually gasp from shock and respect the special effects team that made such a scene possible.

In terms of story, there is something unique about the various ghosts in particular. These ghosts are truly awful people. If they cannot be happy they are going to make sure that no one else is happy either. In fact, there is only one ghost on the ship that has any redeeming quality and that is the ghost of the little girl, Katie Harwood, played by a young Emily Browning. What is far worse is that some of the crew members do not have many redeeming qualities either.

In addition to a wonderful film plot that keeps one guessing until the end, the acting within the film is excellent. As the only women within the salvage crew, Epps holds her own among the primarily male crew. She takes the lead in many instances, which is always amazing to witness in any film. The horror world of course is full of female heroines of course, which might be why it’s still one of my favorite genres.

Emily Browning is also worth talking about within this feature. She is so sweet and sincere in her portrayal that one really wishes there would have been a different outcome for the character. I can say that what occurs toward the end of the film with that character in particular is not all bad, but one still wishes all the horrific events that Katie had endure never happened to her in the first place.

While there are many men within the film that could be spoken highly of there is one that needs the special attention. The acting of Desmond Harrington is absolutely magnificent within the film. Most people who view the film now will know him from Showtime’s Dexter as Joey Quinn. He does an absolutely terrific job as Ferriman. He has the perfect amount of charm, fear, and anger blended into Ferriman. Upon seeing him on Dexter, I was quite happy to see him in a genre based show that works well for Harrington. The truth is this is one of those rare films where each performance plays off of the other in such a way the film flows with ease.

In conclusion, Ghost Ship remains one of my favorite horror films. With tons of blood, gore, and gross-outs this film is a horror lover’s dream. And amazing actors embracing each and every one of their fears within the film, this is one piece that comes together quite nicely in the end. And unlike the characters, Ghost Ship remains us that we should pay attention to our surroundings.