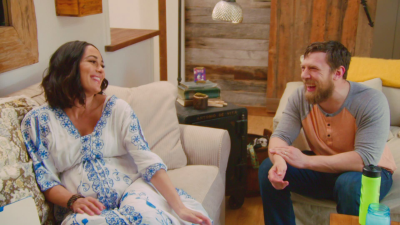 After deleting today’s brand new General Hospital, instead of pressing play like I thought I had, my dad and I decided to watch Total Bellas instead.  I’ve become oddly addicted to these behind the scene shows about wrestling figures.  Something that has probably somewhat ruined the industry as we knew so little about it back in the day.  And now I feel super old for using the phrase back in the day.  That is not the point obviously.  Daniel Bryan and Brie Bella are talking about lingerie and they start talking about thongs.  My dad immediately agrees with Daniel that there is no way that is comfortable.  Then of course another inappropriate father-daughter talk took place.

Dad: There’s no way that is even remotely comfortable.  It goes straight up her ass.

Me: Thongs are oddly comfortable.  She’s right.  You don’t even feel it.

Dad: OF COURSE YOU FEEL IT, IT IS GOING UP YOUR ASS.

Me: But you don’t!  It’s just kinda there and you don’t feel it.

Then Daniel Bryan mentions that Brie’s ass cheeks must be numb, which continues the insane conversation with my father.

Dad: He’s right.  You guys are wrong about this.

Me: How can we be wrong when we are the ones that wear them?!?

Dad: Because you just are!  You mean to tell me that women don’t feel it at all?

Me: I guess that Brie and I both have super numb ass cheeks.

At this point my dad shakes his head and I think this bizarre conversation has ended.  In thinking that I learned I was COMPLETELY wrong.  The reason for this of course is because Brie confirms that you just kind of forget it’s there because you get so used to wearing them and that she has been wearing them since middle school.

Me: I’d like to confirm I have not been wearing thongs since middle school.

Dad: Why are we still talking about this?

Me: Because you don’t believe that woman don’t feel the thongs!

I can’t really say I disagree with his last words.  Aren’t we all a little strange sometimes though?