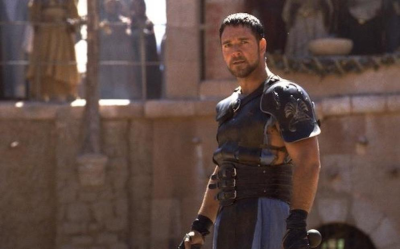 I oddly enough remember watching the following film in high school.  I kept hearing good things about the movie and thinking there is no way I will dislike this film.  The truth is not only did I not like it, but I found myself believing it was beyond overrated after seeing it on many people’s best films of all time lists.  While I would never include the following film on a  list like that for myself, far be it from me to deny others their love of the film.  And who knows, maybe I am just not a gladiator film girl because I did not care for 300 either.  However, something tells me with all that praise and all that male friends I have that love this particular film, I’m opening up to comments on why Gladiator is not overrated.

Day 21: The most overrated movie – Gladiator

Let me start by saying I oddly enough love the performances in this.  I know that might sound weird or that films have to be good to have great performances.  And to that I say that clearly you clearly have not see The Dark Tower film that came out last year.  Russell Crowe and Joaquin Phoenix are phenomenal in this film.  In fact, I’d venture to say as creepy as Commodus is within the film he is by far one of the best villains out there.  Lord knows he made all of us root for Maximus.  And as much as I like villains I worry if for any person who was truly on Commodus’s side.  Though I can hear my dad purposely telling me he is on Commodus’s side just to annoy me. The backstory we are provided was the bits I was the most interested in overall.  I wanted Maximus to get that revenge.  I wanted his family avenged.

However, for such a beautiful film and well crafted film I found myself oddly bored. This was one of the one and only times I felt that I could fall asleep in class. Somehow I managed not to fall asleep, but I think that is because there was a part of me that kept thinking that overall the film was going to get better. Instead it turned into this machismo vs machismo type of film and let the action take the forefront in areas. To me that is where the film ultimately suffers.  The blood, limbs, and swords flowing and swinging everywhere does nothing for me and this is coming from a girl who loves the Saw franchise.  There’s no true depth to the scenes.  There’s no urgency other than we we hope Maximus doesn’t die. Though unlike most films I did not feel that urgency.  I kept believing that in the end the good guy would win out.  Not in the cliche sort of why, but more of a predictability factor.

Ultimately, I think the film suffers because it needed at least thirty minutes trimmed off.  Because of the predictability of the feature most of us find ourselves okay with walking to the bathroom.  Some of us, myself included, found myself debating on staying there.  I probably would have too if the teacher would not have sent someone in there after me to make sure I was okay.  Gladiator is never going to be my type of movie.  This does not deter me from watching Russell Crowe or Joaquin Phoenix films.  In fact, I’d even say this does not deter me from watching other gladiator films, but as far as this one goes, I think there’s a better way I can spend two hours and fifty-one minutes.