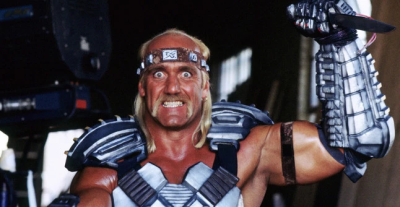 I have struggled with this question.  I even found myself asking one of my best friends and my father if there was a movie they thought no one would expect me to like.  The truth is I like so many films there are not many people that would be surprised to here I love a movie.  When bringing up the movie I decided upon, a film that is just beyond out there, my dad said I should pick this one.  And as much as my dad laughed at this film once upon a time when I told him this was the film I debating on was a horrible movie.  I then proceeded to defend this choice because it’s amazing!  How can you deny Hulk Hogan as a space alien who fights The Undertaker who is also a space alien?  You can’t and that is why the movie I have chosen to write about is Suburban Commando.

Day 25: A movie that no one would expect you to love – Suburban Commando

I know from reading above if do not know the greatness that is Suburban Commando you might think I’m crazy.  After all, even intergalactic bounty hunters like Shep Ramsey (Hogan) need a vacation every now and then!  I realize that whole sentence does not help me out any, but the film also stars Christopher Lloyd and Shelly Duvall who are both fantastic.  AND!!  There is an inevitable bond that forms between the Wilcox family and Shep.  AND!!! While ultimately Shep is supposed to be the one protecting them, they teach him that it is okay to accept help from others and he does not have to everything on his own.  He has an actual family that he can fall back and depend on.

When anyone thinks about that it is a great wholesome family message.  Suburban Commando is the type of film a kid would have begged their parents to rent back in the early nineties when it came out on VHS.  I’m determined that is probably how I saw this film come to think about it.  Truth be told I probably saw Hulk Hogan on the cover of the film and became increasingly excited before somewhat begging my parents to rent if for me.  After all, “A film with Hulk Hogan could never be bad,” insisted seven year old Michelle.  I do not know if I actually said those words, but I can imagine them coming out of my mouth all the same.  That could because I tend to think that about a lot of films and say that about a lot of films that turn out to be absolutely atrocious.

I cannot truly defend how horrible this film is ultimately, but what I do know is that it takes me back to a simpler time whenever I find the film to watch.  I would even get overly excited about purchasing this one to watch on DVD every now and then for the pure cheese factor of this film.  This is by far one of the guiltiest pleasure films one will ever watch in their lifetime, but there is just something about it that is hilarious to me.  I buy that Hulk Hogan is an alien that has to learn how to be a human from the family he takes up with upon arriving on Earth.  I completely buy that he cannot truly get away from his job because the villains force his hand and bring their threat to Earth in order to rid themselves of the heroic bounty hunter.  Without him they are free to reign as much havoc as they want.  Thankfully for us the Wilcox family help deny them this joy.

In the end, Suburban Commando might not have been an Oscar contender, but a Razzi contender instead, it is still one of those movies from my childhood I adore.  I can say that about a lot of movies that Hulk Hogan starred in including Mr. Nanny and the amazing television show that was Thunder in Paradise. The truth is Hulk Hogan is not the best actor in the world.  I’m sure this statement is one that does not shock many people to read, but he’s enjoyable.  He created a manly character who got the job done, but was willing to admit that he was stressed out enough to need a vacation.  Not many people do that yet alone men.  And the truth is until recently this was a moot point in most places.  Most people did their job and did not ask for much time off.  Vacation.  What vacation?  So despite putting two steps forward and taking three back with the continued stereotypical gender insults to Charlie’s character, I still find myself wanting to come back to this one every now and then.  Thankfully, I won’t have to utter the phrase “I was frozen today,” after watching it though.