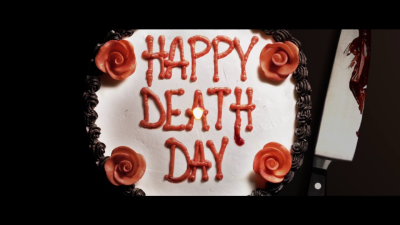 Back in late July, before the trailer from Happy Death Day was plastered  everywhere, I watched the trailer.  I had immediate desire to view this film.  A horror film version of Groundhog’s Day?  Yes please!  My desire grew when I realized that the film was slated for a Friday the 13th release.  A horror film on Friday the 13th in October.  Be still my horror loving heart!  With all the hype surrounding the film though there was a small part of me that worried the film might be awful.  I was starting to feel like the characters in Fanboys and wondering if I would be gravely disappointed by the end.  Thankfully, I was beyond pleased when leaving the theater Friday evening.

Audiences open up on a college student, Tree Gelbman (Jessica Rothe), in a random college guy’s dorm room, Carter Davis (Israel Broussard), on what turns out to be her birthday.  At first she goes through her day like any other day.  Audiences quickly realize that Tree is not a very nice person soon rather than later.  Generally, the whole point of these films is that we are sympathizing and rooting for the lead character to survive, but after Tree’s first death takes place within the film  audiences are left to wonder if we will feel bad enough for her to connect with her by the end of the feature.

The film does an incredible job with the character development of Tree and ultimately making her a character viewers want to survive the worst case of déjà vu ever! And so you don’t experience the same while watching the film, this is the part where I warn you that there are slight spoilers ahead.  Eventually, she tells Carter her predicament and he suggests that she has been given a gift.  She has been given the ability to name her killer as well as immortality.  The only problem with that is later on in the film where we realize, through our lead fainting, as well as her admitting she is getting weaker that Tree does not have many more chances.  How many chances she truly had to figure out her killer is never revealed, but we know that Tree has a time limit and that Carter’s plan to keep dying can only hold up so much longer.

As the details of Tree’s life, and those around her are revealed by her investigation skills, viewers realize that there is more to the young woman we meet at the beginning of the film.  Far more than she ever gave herself credit for when audiences first meet her.  The evolution of the character is quite empowering for any female to watch.  Tree allows us to see that we do not have to remain the same person if we choose not to be.  The thing we have to remember is we have that power.  We do not have to be who people perceive us to be.  We can break those barriers down. Our lives are about choices and instead of being a horrible person we can change our ways and become someone that not only we can be proud of, but our parents can be proud of as well.

Happy Death Day is a clever blending of the horror and comedy genres.  The deaths are horrific and by the time the big reveal happens audiences are wondering what is going on as much as Tree.  While the big reveal seems obvious in hindsight, and might even by the time of her last death, there is something oddly satisfying to know just who has been trying to murder Tree all along.  After all, by that point in the movie we want her to win.  We are praying that she has conquered this bizarre mix up.  Audiences are also blessed by the feel of a current film that feels like one we would have seen in the nineties with eighties renominates.

In fact, the only thing that could have made this film better was having a random cameo by Bill Murray at the end.