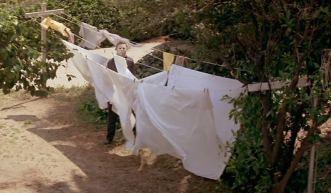 While taking my first film class at Kennesaw State University our professor announced that the whole class was going to take part in watching a horror film on Halloween. The class got the chance to vote on various films, but deep down I hoped we would be watching the John Carpenter classic, Halloween. After all, Halloween is the one film that each and every Halloween I must view. Sometimes I would view the film later in the day or barely after midnight. In all honesty depended on my sleep schedule once upon a time.  Now it depends on the Halloween tradition of seeing a new horror film with my dad every year and the showtimes at the theater. But I digress.

That Halloween in particular I was able to enjoy Halloween via a projector on a big screen. Far bigger than any screen I had been able to enjoy the film before. This made the film all the more exciting. This made the film just as frightening as the first time I viewed the feature. The sound was louder, so loud that despite knowing the film as well as I do, I still jumped at certain parts of the movie. After all, that is the joy of seeing a horror film in the theater. The film is supposed to be loud and provide some frights and command tension. Halloween does that and more.

Back in 2010, I was also privileged to catch the Inside Story: Halloween on television. The documentary focused two full hours on the film that impacted as many people as Alfred Hitchcock’s Psycho did in 1960. There are many reasons Halloween remains a classic to this day and one that every horror fan should view at least once, but I advise to explore the film again and a again.  There is always something new one can take away from each viewing after all.  Subtle nuances that were not noticed the first time and shots that have continued to be built upon in other horror movies over the years.

Instead of delving into the synopsis right away, I must talk about a few facts. There was a tight four week filming schedule at the time Halloween was made and an estimated budget of $320,000. Considering most films cost in the millions to make these days this was considerably low budget, especially for the times. With limited resources, Carpenter knew that he must maintain modesty within casting and all other areas of the film. Not only did Carpenter direct the film, he also wrote Halloween and composed its now famous theme.

At the time his highest paid actor was Donald Pleasence, because the other actors who were offered the part of Dr. Loomis would not take the role due to the low budget and small paycheck. And at the time Jamie Lee Curtis was an unknown talent.  After the release of Halloween her star-power skyrocketed. All this from a horror film that should be known as the little film that could.

A detailed synopsis of Halloween is as follows. In 1963 on Halloween night, police are called to an address only to discover the brutal murder of seventeen year old Judith Myers. This is no typical case of the boyfriend slaying his beloved though. Oh no. This is the case of a six year old little boy, her brother, Michael Myers who has murdered his sister. Upon being discovered, Myers is institutionalized. Dr. Sam Loomis (Pleasence) insists that he has tried to treat the boy for eight solid years.

Upon discovering there is no hope for Michael for the next seven years, Loomis has tried his best to keep the young man locked away. After fifteen years however, Michael discover a way to break out of the institution. While most wonder where Michael has gone, Dr. Loomis knows exactly where to look. Loomis heads back to Haddonfield, in hopes he will be able to find Michael before he can wreak any havoc and lock him away again. To make matters worse and worry Loomis further, by the time he reaches Haddonfield it is Halloween night. By the time anyone begins to truly listen to Loomis, Michael will have already reigned more terror than the small town could have ever imagined.

In terms of acting, Halloween is spectacular. Not only do the talents of Mr. Pleasence shine, but with the actresses within the film portraying teenagers in a true light the film is even more believable. Jamie Lee Curtis truly shines as Laurie Strode. She is the shy smart girl of her group. She would never be dubbed as the prom queen or cheerleader type because that goes to P.J. Soles’ character, Lynda. Then there is of course the rebel of the group in Annie (Nancy Loomis). Together the girls represent various teens that everyone in the audience could have represented not only during that time period, but also during this time period. In current day most cliques are so blended that the film is still effective.

The characters are not the only reason the film is still effective to this day. Another aspect that is important to the film is the fact that we are not just viewing the film. The main point of view is through the audience’s eyes, making the story much more frightening. In fact, the opening shot of the film is one of the most chilling in horror cinema history. By the use of a long shot, Carpenter takes viewers into the Myers home and up the stairs where Judith Myers can be found in her bedroom. One of the other interesting aspects about the opening is that audiences see a mask being put back on and begin to view everything through Michael’s eyes. By taking on his view point, audience members are asked to participate in the crime. As Carpenter continues to use camera and the mask to his advantage, viewers are far more tense than they would have been if the camera would have merely followed the child up the stairs. This fills the feature with more anxiety.

Overall, by utilizing a limited but talented cast, using unique film techniques, and having an amazing score, Halloween continues to deliver as many thrills and chills today as they did back in 1978.  In fact, I cannot imagine having a top ten list of horror films that would not include Halloween somewhere on it. And this is not to downplay Rob Zombie’s remake, but the remake does not have the same appeal to me as the original.  The mannerisms and the way Michael handles himself is truly what makes the film all the more frightening. With the story paced slower than normal, and making the characters likeable, the original Halloween is always one I will watch again and again. The film is a true classic and still manages to inspire filmmakers to this very day. One should take the time to enjoy this classic piece of cinema this evening.  After all, maybe it will teach you a thing or two about how to escape the boogeyman.