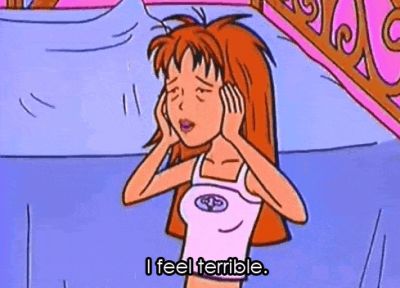 I have always said you can tell when you have the flu.  Maybe not at first, but eventually you get this inkling that there is something wrong outside of a cold. All of my symptoms seems to build over a three-day period.  Thankfully, this occurred after I had jury duty, but something tells me the virus was already there.  My cough from hell certainly was last Tuesday.  This wet cough that occurred so often during my work day that I felt like my chest was on fire.  All I knew is that I wanted to go home Wednesday afternoon and go to sleep.  By Thursday morning I woke up knowing I didn’t want to function  I laid in bed an hour before I called into work, which I’ve done all of three times since I started working.  Between that point and 8:30 in the morning I went back to sleep just to wake up, call to make a doctor’s appointment, and go back to sleep.

Sleep has been my friend.  Granted, I want to sleep as late as possible on most days anyway, but this past week all I’ve wanted to do is sleep period.  In fact, this morning I went back to sleep after waking up at 5:20 to use the bathroom, and feed a cat because he insisted food make its way to his belly.  I feel drained.  Despite an attempt to function in a world that isn’t designed for much time off to recover, my body still yearns for sleep.  That’s why when I get home it is becoming increasingly difficult not to go lay down.  I ate dinner last night, a dinner I actually wanted, and played with my pups before taking a shower and sitting next to my cat on the couch.  I didn’t want to do anything else.  I didn’t even get that far in a book I should have had read by this past Sunday for a book club meeting I didn’t even get to go to.

The only thing I know besides the fact I’m tired is that my coffee tasted good yesterday.  Since last Wednesday my coffee has tasted meh.  I don’t know if a hazelnut creamer, which is my preferred coffee choice, would have helped my coffee or not yesterday.  The coffee was gross.  I kept sipping on it all the same though.  I kept hoping that my cup would magically taste like the magical beans I have known them to be when brewed over the years, but nope.  I think between Monday morning and Tuesday my taste buds have come back to me.  Not my loss of appetite because I either want food or not.  There’s still no in between, but I don’t feel like if I’m not drinking water every two seconds I’m going to thirst to death so that’s a plus.

Last time I watched the news, the facts were this.  In Georgia, sixty-six people have passed away due to the flu.  There have also been three pediatric flu deaths.  That’s an insanely scary thought for something so common.  The scarier thought is that there are people out there walking around with a self-diagnosis, are still determined to go it alone with over the counter meds, or no meds at all.  And then of course you hear stories about how the medications are too expensive, and the doctor visits for that matter, as well.  If you have insurance then by all means go to the doctor.  There is nothing wrong with admitting that we need help in life.  This includes modern medicine.  Do we want to go to the doctor? No.  No one wants to go to the doctor, but sometimes as adults we have to do a lot of things in life we do not necessarily want to do.

I bring this up because taking care of ourselves is far more important than we allow ourselves to think on most days.  There is only one us.  We get one lifetime.  And even if we spend part of that lifetime in a doctor’s office just to spend our recovery time sleeping or catching up on television shows we are painfully behind on it that’s okay.  At least we are still here.  At least we live to eventually want to come back from the depths of our bed, or couch, and show the world we are still here.  I for one am happy to report such and happier to finally have the energy to complete this or write again at all.

The flu can only hold us down as long as we let it.  Yes, the flu lingers and makes us feel far more lethargic than we care to admit to anyone, but eventually we get to become functioning members of society once more.  Even if that is merely going into work because unlike the meme where a person can call in dead due to a lack of sick days that is not the case.  But in all seriousness, be careful this flu season and take care of yourself and your children because the flu is no joke.