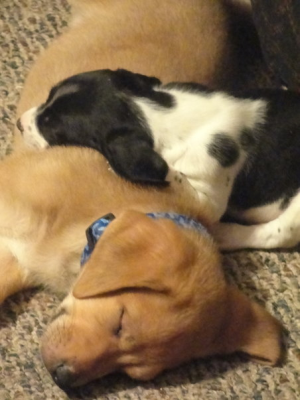 Last night when I got home I watched Oreo wobble over to me. He took a little longer than normal, but bless his heart he made it. And once he did I picked him up and sat in the chair with him. I noticed he was trembling, which let me know he was in pain.While I tried to soothe him the best I could before giving in and leaving him outside to go inside to get his pain pill, I knew he needed more assistance than I could give him. When I came back out, he was sitting in the same spot. My chair in the backyard. He was panting, but it looked like he was smiling at me. In my mind it was as if he knew what I went to do and that it was all for him. All to help him. 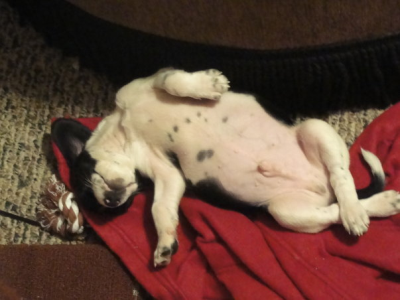 Once I gave him the pill, and Cocomo a fake pill, I picked my beagle mix back up and stayed outside until it was dark holding him. At one point he licked my nose before cuddling up with me more. I fed him by hand last night because he appeared to be in more pain if he leaned all the way down for the food. Of course once I laid his food bowl near his dog house he seemed to maneuver himself fine. Before that though, he had a good ten hand fulls of food. I didn’t care if that was how I had to feed him as long as he ate. I’ve also broken some Beggin’ Strips down the past couple of times he’s ate those too because once we fed him smaller pieces in the house he refused to eat a whole one anymore unless the strip was in pieces of course. 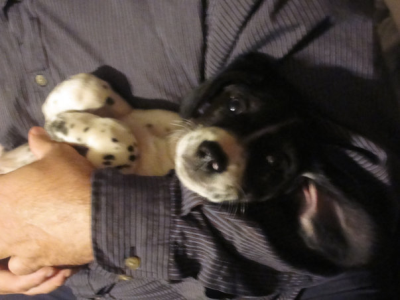 This morning though as I was getting dressed I heard whining, crying, barking, and howling. As soon as I put my shoes on I went outside and noticed he was on his back in his dog house. He couldn’t get up. I got into the backyard in record time and helped him up. That was when I noticed he was sliding his hind legs behind him instead of walking so I called my dad. I told him I thought it was best to take Oreo to the vet. I then called my boss who I told I would either be in later or not at all depending on how this vet visit went. There was a part of me though, much like the last time we took him to the vet, that knew something was horribly wrong. After all, a dog doesn’t randomly just drag his legs behind him for fun. He doesn’t wobble around like he’s drunk either. 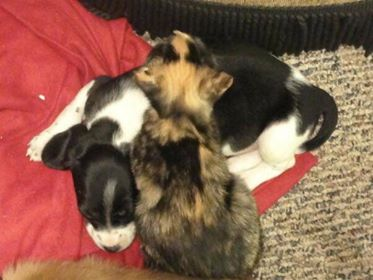 Cocomo didn’t question me as I took his buddy. I made sure the gate was secure, I picked up Oreo, and we drove to the vet. He sat calmly in the backseat and only whined a little when I laid him down. There was no whining when I took him out and carried him inside before the doctors even arrived this morning. I sat in the waiting room with him lying against my chest and pet him. I talked to a woman there whose dog had a seizure that morning and was three years older than my pup. I also told Oreo that no matter what happened he was going to be okay. I knew if push came to shove this morning and I had to make a decision I never wanted to make I would for him. I would if it meant that he wasn’t in pain anymore. 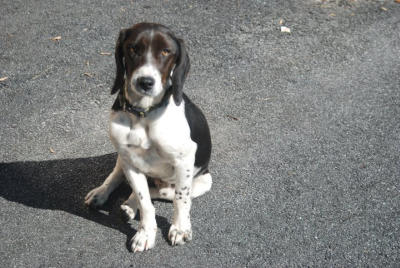 And unfortunately, I had to make a decision I didn’t want to make. I was told that because of his cancer there was a chance it had already spread to his spine and thus took away his ability to walk. He was not responsive in a way he should have been when the doctor looked at his hind legs. Instead he had a pure reflex type of reaction. Something he would have done regardless of his pain or not. And as soon as she told me that I knew in my heart I had to let him go. I talked to my dad and told him that we could give him steroids and help him go to the bathroom and basically keep him comfortable in hopes that his leg strength came back and it wasn’t the cancer. We could get him an MRI to basically be told that the cancer spread. Or we could let him go because he seemed to be in a lot of pain and it appeared the cancer did spread. 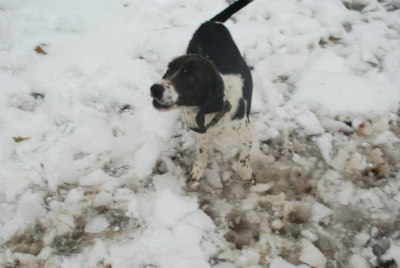 My dad helped me make the decision I knew in my heart was right. They then brought my baby back to me and I said goodbye. My phone oddly enough called one of my friends as I began to cry over knowing what I needed to do. I couldn’t even say the words to the vet. I admitted to her that I couldn’t make the request through tears.  She had to say the words for me and I nodded. She asked me if I wanted to be present and I told her yes because I didn’t want him to be alone. She asked me if I had ever been present for such and I told her no. She then explained the process to me. She told me that he might let out what seemed like an agonizing breath after the shot was delivered but it wasn’t a breath. She said his body might spasm a bit in a breathing motion but that was normal and she didn’t want it to freak me out. 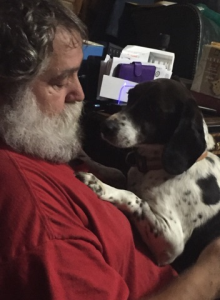 I told her I understood the best I could and she said she would get a blanket and bring him back into the room and I could take all the time I needed with him. There was a small part of me that wanted to lay my head against him and stay for hours. Instead I laid my head against the blanket and looked into his eyes as I rubbed his back, his paws, and pet his head as I talked to him for the last time. I told him that once he got to heaven he was going to get to meet his grandma and that she would take care of him until I could arrive. As my friend pointed out he now gets to chase all the rabbits, squirrels, and other critters he wants. Though thankfully, he will not be bringing my mom a dead anything in heaven.  And if that is possible I will get yelled at for getting a hunting fur baby by the time I get to where I’m going. 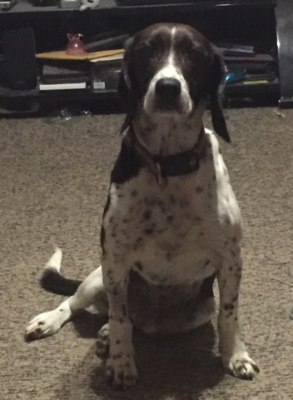 I assured him he was loved. I told him I would miss him. I also explained that he was not going to be in pain anymore and that he didn’t have to be strong for me. This was something I also told him last night. I explained to him as I held him that if he needed to go that I would be okay. We would all be okay and that he didn’t have to continue trying to be strong for us. I think that is what made this morning even harder for me. As crazy as it might sound I think he needed to hear that much like people do before they go. I feel in my heart that he needed to know that if he left we would all be okay. He licked my hand for a long time this morning as I talked to him. Once he stopped I knew he was ready. 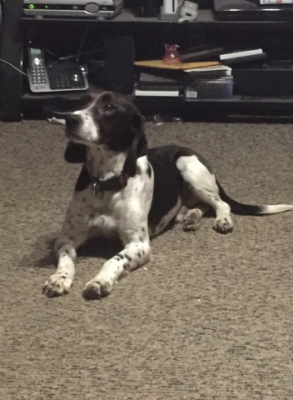 This was shortly after I paid one of the women out front. She came in the back and took care of everything for me so I didn’t have to be a blithering idiot out front in front of others. She informed me that she was extremely sorry as he was such a sweet dog. For some reason I felt better that people remembered him and thought kind of him. The doctor came to ask me if I was ready and she came in with her tech. He rubbed Oreo’s back and I rested my forehead against his nose for a moment before the doctor administered the shot. Oreo was gone in under a minute. He was ready to go even if I wasn’t ready to give him up. She asked me if I needed or wanted a minute with him and I said yes because by that time I was sobbing. 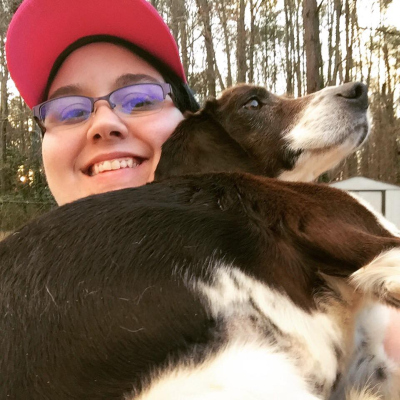 During this time I told him I was sorry he had to deal with cancer. I told him that I wished there had been more we could have done because I would have. I told him that I was sorry he had to endure so much pain. And once more I let him know that I loved him and would miss him, but that he was in a far better place now without us. As she came back in I asked for a bit more time because I just wanted to rest my head against his once more. I wanted to feel his fur against my skin. I kissed the top of his head and I knocked on the door so the doctor knew she could take him. She insisted I could have more time and I told her I couldn’t keep staring at a dog that was once hyper active and watch him as if he were sleeping. I wanted him to be in peace. She understood. 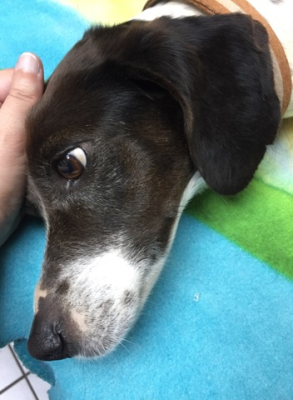 Once I was done I went outside and cried more while sitting in the car and told my dad he was gone. He asked me questions and I provided answers before grabbing food and heading home. The stranger part was when I arrived home. Our other dog, Cocomo, was waiting in the front yard in the spot I park my car. He moved when he saw the car and waited for me to come to a halt before coming to the door once I opened it. He began to sniff me. He sniffed the backseat where his buddy laid. He looked at me and kept looking through my car to find him. Once he didn’t see Oreo, he rested his head on my leg and I pet him. I told him I was sorry I couldn’t bring Oreo home and I walked with my pup before letting him in the backyard for his water and food. Once he drank, he laid down in a huff.

I don’t know how to make this better for Cocomo other than being there for him. I wish I could magically take away his heartache.  I know there isn’t some magic fix for him, just like there is no magic fix for my father, or me.  Right now all I really know is that as sad as I am, my baby doesn’t have to hurt anymore and that is what is really important in the long run.