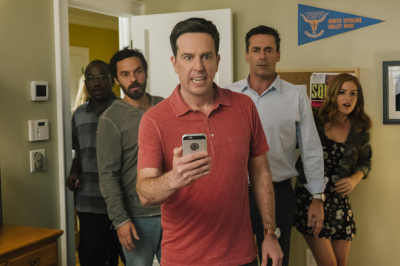 There was a part of me that wanted to write most of this movie challenge in June to post in July.  The problem with doing so is knowing that day two (the last movie you watched) and day sixteen (the last movie you saw in theaters) would change about five thousand times.  I watch too many movies for the answers not to change.  This is thanks to MoviePass, various movie channels, and of course Netflix.  And the truth is not too long ago I found myself watching Never Been Kissed yet again because it was on television.  There are plenty of films I fall into that trap with, but for some reason this summer Never Been Kissed has been played far more than I anticipated.  Thus the answer to day two of this challenge has changed four times in the past two weeks.  It has gone from Never Been Kissed to Hereditary to The Incredibles and now to its final answer.

Upon seeing the trailer for Tag I immediately was drawn to this group of men continuing to play a childhood game.  Maybe that’s because I feel like I’m a child at heart.  If there is a toy I spot in the toy section or in the clearance section I’m not afraid to put it in the buggy.  And despite never wanting to have a Funko Pop collection I have lost count how many of those figures I have lying around my house.  Only one has made it to my new job, but there is always a debate of whether or not they should be rotated and I become that person at work.  After all, like George Bernard Shaw once said, “We don’t stop playing because we grow old; we grow old because we stop playing.”

That is also the motto that the gentlemen in Tag live by, which speaks to my inner child.  Why should we completely grow up?  Yes, we have to pay bills and be an adult, but that is not to say that we have to sit back and have no fun as we grow old.  In fact, the older I get the more I yearn to do in life.  Of course, I’m also the girl who finds herself dying her hair unnatural colors in my thirties because I feel now is the time in my life to do such.  We only live once and yet we have so many societal rules including at most places why we should keep to natural hair colors.  I personally think employers are doing themselves a disservice by limiting their employees hair color choices to brunette, blonde, black, or red.  That is another blog post for another day though.

My point, and the one I believe the film was trying to make, is that we might not be as close as we were growing up with people, but we do our best and try our hardest to find ways to keep those people in our lives.  In many ways I feel by doing so we keep our childhood alive to some degree.  Do we get to drop everything and hang out as much as did once upon a time?  No.  Some of us have kids, some of us have work hours that conflict with the majority of our group, but ultimately we find ways to stay in touch.  Sometimes that way is through Facebook.  As much hate as Facebook gets, and has received in this recent year, I do love that it allows me to keep in touch with new and old friends alike, but at least it allows us to stay in each other lives.

Granted, these guys have truly made me want to have some goals of my own.  I know I’ve spoken friendships on many occasions the past year, but I certainly cannot imagine my life without certain people despite the fact we do not talk as much as we should.  This does not make me view that friendship any less than I view my others.  The unfortunate part of growing up that no one wants to tell us is that we do have to part ways somewhat and that’s okay.  There are so many friendships I have where numerous states are barriers, but if one of those friend’s needed me I’d be on the phone in the middle of the night trying to help in whatever manner I could.  This also reminds me how important seeing people face to face is though too.  Those connections should be cherished and nurtured just like any other.

Ultimately, and despite the fact that none of you asked what I took from Tag, I cannot help but think how important of a message someone is missing out by not taking the time to view this one.  If it’s playing near you take the time to go view it today.  Better yet, call that friend you haven’t talked to in a while and invite him or her along with you.