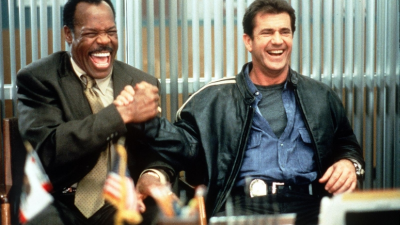 I also changed the answer about five times to this question.  I debated on various superhero films including The Dark Knight, Iron Man, and Captain America: The First Avenger.  This morning I even debated on changing my answer to Mighty Morphin Power Rangers because it’s still one of my favorite movies and it never lets me down.  However, I went with something that holds nostalgia for me and memories with a group of friends and my dad when we went back to the theater to see it for a second time back in 1998.

I remember when seeing Lethal Weapon 4 I created a rule to live by when watching movies.  I vowed from that day forward to watch all of the previous installments of a film before seeing a sequel.  That’s right.  I walked into Riggs and Murtaugh’s relationship in the last sequel ever made featuring Mel Gibson and Danny Glover.  I later found myself watching the previous installments later on with my father.  It was such a painful experience having to watch those with me once more.  I should also note the sarcastic tone that should be noted in that last statement.  I think that is one of the may reasons that Lethal Weapon 4 holds a special place in my heart and makes that particular movie my favorite action/adventure movie overall.

Another reason is I can remember going initially with a group of friends as we piled into Lee’s uncle’s van that particular afternoon.  The odd part is I even remember the Dairy Queen visit afterward.  Why?  I don’t know, but I’m reminded of sitting closer to the front than the middle or the back.  The reasoning was of course because God forbid we sit with the adult, or adults in this case, that brought us to the theater that day.  If they sat in the back, we moved toward the front.  The only time this did not apply was when my mom actually ventured out to the theater.  She always sat with us and we did not question her for some reason.  The same can of course be said when I went with just my father or ran into another friend with their parent(s). For us this is what we did as teenagers.  It was our move.

But my point is that I don’t merely love Lethal Weapon 4 because of the witty dialogue or the way that Glover and Gibson play off each other.  I love it because when Leo is yelling bite me at everyone my entire group of friend’s looked over at me.  I love it because when Leo is in the graveyard talking about his frog friend we all looked at our friend Lee.  There was something in there that made each of us glance at each other at some point and laugh.  We laughed at parts that were funny to the whole audience, but in an odd way we were laughing at inside jokes too and making new memories.

And while some people don’t believe memories can equate to a film reaching favorite status, I cannot imagine not having a connection to each and every favorite on my list.  These stories can truly bring us peace on the days we think there is no more peace to be had and grant us memories prior to a friend’s passing, which too can bring us peace.  Sometimes the glory of watching a favorite film later on in life is knowing that someone introduced you to one of your favorite action franchises, and the smile gracing our lips at the thought of the friendships of middle school’s past.