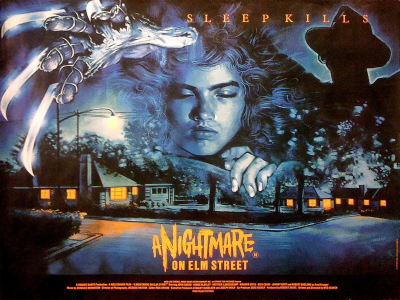 If I’m being honest that is not how the question/request for day four is worded.  The truth is I’ve seen Scream one too many times and I had to write the question that way.  It was a must.  With that said I’m oddly enough not writing about Scream today.  That comes later on, which is why I went with one of my other favorite horror films.  As a horror junkie, I’ve already decided to do the horror challenge that is similar to this one in October.  I feel that is only fair with as many horror films I consider my favorite.  This always changes over the years, but I have to admit there is one film I always come back to over time without fail.  And to the point that the other night when I saw that this film was playing on television and that it was the remake I was a little disappointed.  This isn’t necessarily because the remake is awful, but I prefer my Freddy with some humor.

Day 4: Your favorite horror movie – A Nightmare on Elm Street

Odd story time.  The first time I watched A Nightmare on Elm Street was in the fourth grade.  I was working on a project to represent Six Flags Over Georgia at the time in the parade that we all waited to partake in from the moment we saw it as kindergartners.  The sad thing is I can’t remember now if the parade was strictly floats that we had to make representing Georgia or something else we picked.  Either way I realize how weird this probably sounds to most people reading this.  In the fourth grade though is when I really discovered horror films.  This was after the summer I had my first boyfriend who loved horror films, when I still did not, and he told me to go home so they could all watch Jason Goes to Hell after we watched My Boyfriend’s Back. I don’t know that I would consider the the latter a horror film, but it does involve zombies so maybe it was my first horror film.

I digress though.  After that summer I found myself going down a rabbit hole of horror and being told that and I quote “If you can handle A Nightmare on Elm Street there aren’t many horror films you can’t handle.”  It was if in my ten year old mind I became Barney Stinson and yelled out CHALLENGE ACCEPTED!  Yes, I realize that is not possible because How I Met Your Mother was not even a thought yet in the history of television.  Regardless though I sat there as I worked on my project with a family friend and my mother and I became a devoted Freddy girl for life.  I also found myself admiring Nancy and being devastated later on when she was killed off in A Nightmare on Elm Street 3: Dream Warriors and thoroughly confused when I saw her in the advertisements for A New Nightmare.

There were more memories formed throughout the years when watching A Nightmare on Elm Street in my house.  Mainly because I just assumed that like most films my parents let me watch that other parents let their kids watch the same films.  Plus, what is a childhood where there is a slumber party without horror films?  That is practically a rite of passage in my book.  And I remember the slumber party with my friend Danielle and Amanda where we watched A Nightmare on Elm Street for the first time.  I also remember my dad being a turd and messing with the trash cans outside and my friend Danielle affectionately getting in the middle of the air mattresses in the den and yelling out, “HE’S NOT GETTING ME FIRST HE WILL HAVE TO GO THROUGH ONE OF Y’ALL!” because we had stayed up far too late.  There was also the time my mom used her nails to rake down my door with my friend Megan over.  It’s a miracle we all don’t have nightmares or still like horror films really.  Oh wait, some of us don’t like them still.

A Nightmare on Elm Street cemented my love for horror and I can’t imagine picking another film to be my favorite horror film for that very reason.  I even have a Freddy purse I bought about a year ago and made a count down calendar when I was able to meet Robert Englund almost three years ago now.  I remember spending what my friend Tiffany felt was far too much for an autograph and hearing him say, “I’m your boyfriend now, Michelle,” in his Freddy voice and my life was forever made as he signed my photo op that my friend Jenn bought for me and started my desire to go to as many conventions as I could afford/fit in a year.  And I’m determined that one day I will get to meet Heather Langenkamp as well.  I’m patiently waiting for that day to occur, but until then I can admire this picture for all eternity.

Granted, I won’t just continue to sit around my house admiring that picture.  Instead, I will continue to watch as many A Nightmare on Elm Street and the many sequels it has spawned over the years.  I will continue to love Wes Craven for giving us such an incredible villain that we all somehow ultimately fell in love with.  But more importantly, I will continue to get great joy of watching this classic each and every year in October and showing it to those just discovering horror films too.

One thought on “What’s your favorite scary movie?”