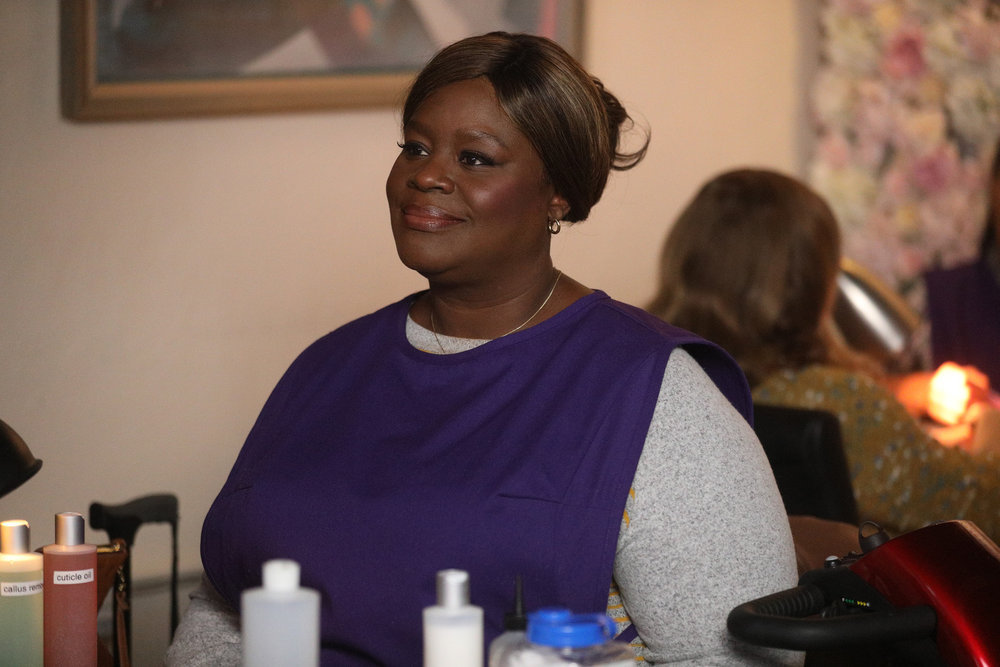 Last week on Good Girls, viewers learned all about opportunities with Mr. Fitzpatrick. This week all realized that the girls’ world is turning upside down almost instantaneously. After the way last week’s episode ended, I had a feeling this cold opening was going to introduce Agent Donnegan to Ruby this week. As Ruby sets up her table to get ready for another day at the nail salon, Agent Donnegan walks in and needs a manicure, of course. She uses a ten-dollar bill to get change with, and Ruby reveals a bit too much about how you check to see if the currency is fake. If they were not onto her before, they are definitely onto her now.

Meanwhile, to find another location for the laundering more money, Dean and Beth go to Gayle to buy out her store. At first, Gayle makes the point that he should look somewhere else as she is not looking to sell her business. However, when telling Beth this, Beth questions why. After all, Gayle didn’t look anywhere else when it came to kissing her husband. In a way, it all turns into extortion, but Gayle isn’t going to settle that easy. She names a price, and Dean is determined to do everything legally. This notion makes me even sadder that he and Beth are not on the same page because she sees this as a place to wash their money.

Upon making another batch, Ruby is concerned when she cannot find her phone. What she does not realize is that Agent Donnegan probably took when she went to make a change for her as she was eyeing her purse. Ruby is visibly annoyed when they keep suggesting places for her to look for her phone, while the reveals my assumption is accurate upon her getting back to the hotel. If only Ruby would have been on guard more with her purse. They were about to pull the plug on the case! They had nothing until they got her phone. Though I cannot help but wonder if anything will be legal considering she stole her phone.

Meanwhile, Beth waits at the same meetup point to have the exchange of goods with Rio. Instead of leaving right away, he sits down across from her and wonders how her system is going. He questions how her system is going, and she lies to him by insisting they are almost up and running. As she explains how easy it is to cook the books because spas are like mattresses, they are all priced differently. He tells them that he wants to wash everything there. So not only do they have their money to wash, but now all of Rio’s dirty money. Her system is no longer just for her because he insists to her that they are consolidating. Instead of giving her a cut, she gives them a cut.

The money in the crime jar went to get the car. Stan is upset that Ruby did not even give him the chance to say no. When asked what Stan wants from her, he replies with, “I want you to be the woman that I married.” The fact that she doesn’t know what that means says a lot as he demands to be paid back for the money that was in that jar. He insists that his soul was in that jar with the shady side hustles that he did go into that jar, and she did not even give him a choice in how to spend the money. While I cannot blame him, this season is slowly breaking my heart when it comes to Stan’s character development.

When the girls start talking about a delay in the cut, Ruby explains that she cannot wait for a cut that long. She needs the money for her marriage. At first, I thought Ruby was going to say no because her moral compass is turning once more, right before she gets caught, of course, or inadvertently her phone leads them to Beth. But no, she is determined to pay Stan back the money that she owes him even though now it ruins the idea of going to wash the money by buying and returning items at various stores. Although wouldn’t all the stores in nearby areas know them at this point for doing that anyway?

Henry confirms for me that none of the evidence is admissible in court. Regardless, Agent Donnegan is slowly putting together Beth and Annie’s involvement. Even though she does not have a lot of friends, nor does she hang out with them every week, if not. As Stan takes the money from the safe, Ruby is eyeballing it, and I cannot help but think that this is the second job that Ruby is going to cause him to lose. She confirms this by riding into the store; Beth still works out and announcing she knows how they’re going to wash the money. Beth insists that literally, anything else but robbing Stan would be better.

While they are trying to figure out other ways to accomplish this, Ruby is feeling petty and is in her feelings. Though everyone is entitled to their opinions, this has gotten out of hand. Beth might be right that the best thing for them to do is couple’s therapy somehow. They would have to figure out a code, though even though there is client/patient confidentiality. Annie is down no matter what. Beth points out by robbing an armored truck, the money would go straight to the bank, and they would go straight to jail. Instead of scrapping the entire idea, Ruby insists there are some kinks to work out.

Ruby decides to feed the girls and stealing bags to make it more believable. Agent Donnegan has put out together that Ruby is not in this alone. It seems like no one’s plan is going truly according to plan. Well, maybe Ruby’s method, but Dean’s is not. He is to high risk to take out a loan. Dean is still determined somehow figure it out on his own as he expresses this to her while she is using the bathroom. Beth and Annie do the exchange with Neil instead of Stan, who is inside enjoying pot roast. She tells him that he cannot go out there, and he already knows something is wrong.

Instead of selling them out, he lets the money go as is, and the bag catches fire from where Beth helped her son on his science project. A crazy case of spontaneous combustion indeed. Beth is determined to make this work for everyone somehow and proves this point after the heist goes well. Gayle makes it seem like there is something more that happened between Dean and her that night. As Beth is determined to buy the place from her, she suddenly changes her mind, and I know the fallout between her and Dean is going to be the biggest one yet within the three seasons.

As Beth stands over the sink, Dean comes downstairs Beth confronts him. She asks him if she would have ever slept with Gayle as he did before. He is trying to deflect, and she is demanding an answer to her question. By not answering, that is an answer. Dean explains that she wears this perfume and what else she likes about her. He admits to her that he probably would have slept with her if things were like before, and she goes back to washing dishes and thanks to him for being honest. Now the question is, did he sleep with her or not. The proverbial rain cloud may never go away. Then again, the Bolands now own a spa place.

They are not the only ones with marriage problems, as we know. When Stan arrives home, Ruby tells him that she got a new phone, and he asked what she did with the rest. She reveals the jar, and he explains to her that she still put him on the line for everything. She stole from him again to pay back what she took from him initially. The technicality is that it was from his job, but he points out that all this is ruining them. She knows that she cannot go back, though, because of the cost of Sara’s meds. The question is now, where is the happy medium for all of them?

By the end of the episode, Ruby accepts the ring Stan has attempted to give her for weeks now. He explains, “he doesn’t know where they’re going, but he wants to go there together.” He understands that she was right in their arguments, though, and even admits he did attempt to return the ring.

This moment is not the only significant as Beth shows off the empty showroom. She goes as far as to ask Rio when all of what he sees is going to be hers. Although he knows that everything that she has come up with truly is hers and not his, she should know by know that Rio is not going to give up his empire anytime soon. As the girls celebrate in the park, Agent Donnegan comes up to them and introduces herself to the group. Hopefully, they have learned this lesson from Mary Pat and do not let her in.

What did you think of this impromptu season finale of Good Girls? Is it a good way to wrap up the season as a whole? What do you want to see more of next season? Do you think the girls will let Agent Donnegan into their circle? Will Rio finally be eliminated once and for all? Only time will tell as we await official renewal news on one of my favorite shows and yours.

Let me know what you thought of this season finale of Good Girls below. What was your favorite part of this season? Which character annoyed you the most? Let’s talk!