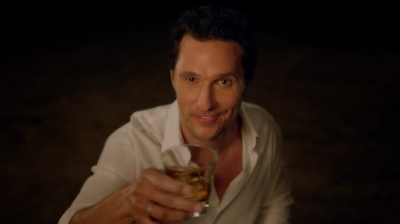 This is such a loaded question for me.  I don’t know that I have an overall favorite actor.  This has changed over the years many times.  In high school I would say I enjoyed films from what I affectionately call the Brit Bunch.  If a film starred Ewan McGregor, Jude Law, Jonny Lee Miller, or Colin Farrell, I watched them.  I even remember seeing Down with Love three times in theaters and Cold Mountain four times in theaters.  I saw Mindhunters and Aeon Flux and limped my way into a showing of Phone Booth because my senior graduation week of high school would not be ruined by torn ligaments!  In college my Jude Law phase continued to the point that when he was on SNL one of my professors mentioned to me that my man was on SNL over the weekend.  At first I was confused, but then not so much.  I had art projects in college that consisted around three out of the four men mentioned above too.

To some degree I have always loved Matthew McConaughey.  After watching How to Lose a Guy in 10 Days I’m not sure how it’s possible not to love him.  Then again I feel the same way about Kate Hudson.  They are seriously the best in that film and why it will always be one of my favorite romantic comedies.  I think that is part of why McConaughey so great.  He started out in these movies that most people brush over.  Though he also really started in a small film called My Boyfriend’s Back, where you BARELY see him which is a horror romantic comedy that has Matthew Fox and the late great Philip Seymour Hoffman. My point is that over the years he has not shied away from anything.  That’s how it should be in general.  We should never be truly afraid to try something new or different.  We should always be pushing ourselves forward and in many ways his career has encouraged me to do so.

Over the years, I have always found myself coming back to his films.  Though I’m still shocked that he’s in Angels in the Outfield and the crazy batshit Vilmer in The Texas Chainsaw Massacre: The Next Generation.  These are films that I remember watching growing up and being impacted by his performances.  Though really Vilmer just scared the hell out of me.  I remember that my Uncle Gregg bought me that movie randomly when one of our favorite movie stores was going out of business and I could not get over how crazy the lead guy was in the film.  Now I can’t get over that Renee Zellweger was also in the film.  Then of course there is Dazed and Confused, where his character does not paint him in the best of light and would probably never exist in today’s cinema, but there’s something about Wooderson that makes the film for us all.

There were a ton of movies in between there, but the next one I truly remember watching, and one of the only I’ve had a pleasure of seeing in theaters is Frailty.  Frailty is by far one of the best films I’ve ever seen.  I love that movie so much and feel it is one of the most underrated horror films ever made. And the truth is the film works because of McConaughey’s performance in relation to Bill Paxton’s performance.  While this puzzle is put together of what is true and what is not of these boys childhood, we are shown flashbacks and continued to relive the story though Adam’s eyes.  The ending is nothing short of spectacular and the film remains one I recommend to anyone who has not seen it.  Seriously, go watch it.  Do it!!!

Before that though there was The Wedding Planner.  A movie that managed to get me through the deaths of an aunt and a uncle.  Normally after a death of a family member, the movie My Girl plays.  After their deaths though The Wedding Planner played.  The odd part is it was two days afteward, like My Girl, and I always caught the film at the same part.  You know the one.  The part where Steve has his hand on the statue’s penis and it breaks off in his hand and Mary is left trying to get the penis unglued from the palm of his hand.  Why this happened I still can’t make heads or tails of but I’m glad that I got to laugh and it seemed so fitting for the aunt and uncle that often told me growing up, “Don’t tell your mom I let you watch that.”

His serious performances have been nothing short of spectacular as well.  Dallas Buyers Club had me in tears by the end of the film.  I will never forget watching that film.  I sat in the comfort of my own bedroom and bawled over various parts.  The same of course can somewhat be said about Interstellar.  I watched that in the privacy of my neighbor’s house when I was house sitting though.  Alone, but slightly different.  And let’s not forget about how Free State of Jones made me cry as well.  All very different performances that left me mesmerized by his abilities to take on such different characters.  Likewise I’d be remiss not to mention his performance in Magic Mike.  Yes, I will openly admit watching him strip was nothing short of amazing, but the man acted his ass off in that film.  I have never disliked a character as much as I did Dallas by the end of the film.

Ultimately that says a lot about an actor.  All these roles that leave you speechless.  And whether you hate or love him, Matthew McConaughey has continued to take on roles that make me feel something.  His interviews leave me laughing at times and wanting to know more about him and his thought process even if I might not agree with those thoughts.  He even managed to get me to keep a bottle of Wild Turkey in my freezer on such an occasion I need a hot toddy.  But most importantly, and despite the fact that the message is meant to go out to younger students, he reminds me to just keep living.  And sometimes that phrase is truly all we need in life.  We just need to be reminded that it will be okay and to just keep going.  People need that reminder and I thank him for not only entertaining me over the years, but also for making me think those words on days I need them the most.