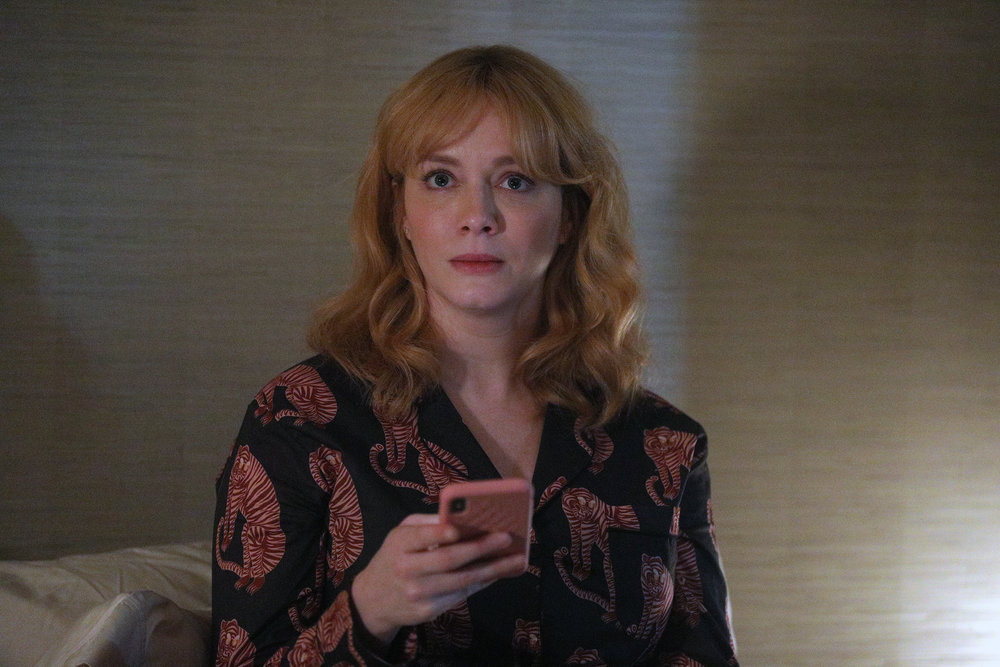 Last week on Good Girls, viewers were left stunned knowing that someone else is on track to hunt down our girls, Agent Phoebe Donnegan (Lauren Lapkus). While making a horrible comparison to discovering that women are involved in this counterfeiting ring, she proves throughout the episode that she might be even more determined to take them down than Agent Turner. After all, she needs to make a name for herself, and this case would allow her to do so.

This week’s cold open is by far one of my favorites this season. The parallels between Beth and Agent Donnegan are night and day. To see both types of women showcased in the opening was refreshing. Although Beth is merely meeting Rio yet again, Agent Donnegan’s desire makes her wiser than Turner at the moment. After figuring out that nail polish was involved in the making of the counterfeit bills, she had the brand the girls used discontinued. However, as Beth points out, they don’t need the color anymore, which is selling for astronomical prices, not the market. They have enough to hire Max’s cousin so soon, Rio is not going to be a problem anymore.

The jar that Stan and Ruby have created for crimes being committed in the house to give to others. While their son considers that they are right now, Ruby explains that they are giving the money to whoever needs it. Sara seems underwhelmed, and Stan immediately takes the new ring that he bought for Ruby out of it. He wants to switch the roles up now and then at this point, but Ruby keeps pointing out that this is not Stan. However, in a way, maybe this is the man that she created. And after revealing to Sara why Ruby is where she is now later in the episode, we know the money will go to a good cause. Her kidney doner’s family.

Annie is trying to use her tutoring session with Lila (Madeline Zima) to find out more about Dr. Cohen and Madeline’s relationship. While it’s not appropriate to share things with her, she does so anyway. Considering that Annie is still a patient of Dr. Cohen or not, Annie has crossed a line that she cannot come back from now. With that said, she considers that nothing is going on between them because they have not had sex in nine years. They sleep at different apartments. Is his relationship healthy? Annie is determined to find out.

Meanwhile, as the girls wait for Max’s cousin at the restaurant, everyone is stunned upon seeing the man that shows up. I know he was not what I was expecting, considering that his entire left arm is gone and most of his right arm. He admits that he doesn’t have what it takes to make this happen. However, he has gotten someone else up to speed, which is a sniper and can make this work. It sounds like killing Rio will take more time than the girls have. Regardless, he points out that they want this job done right. And of course, they do. Beth thwarted the job once before; this time, they must take Rio down.

When Annie goes to see Dr. Cohen again in his office, she gets one question that revolves around his relationship. It’s a simple question. Why her? In short, it’s a “why not me” question, and they both know this. They both know that they are far more compatible in the long run and that despite how great his other relationship looks on paper, that is not everything. The tension between them builds as he cuts the session short, and Annie remarks that she does not want a relationship where she has to crunch numbers. Dr. Cohen delivers a low blow by asking her, “How has that gone for you?” Annie agrees the session for the week is over.

At Beth’s home, Dean shares his good news with Beth about his award; he mentions wearing the dress that she wore for Rio. This moment occurs before she gets a call from Rio, who asks her to come to meet him about the money. He tells her that he cannot use the money that they created because it’s not the same. She tells him that they cannot make the same batch because they have had to change the formula. He manages to get her to touch the gun that they used to kill Lucy, so now her prints are all over it. Rio sees this as the only way to make Beth do what he needs her to do. That’s her incentive. She must do whatever he wants or have the gun turned into the police to lock her up for committing murder.

As soon as the girls find out that Beth touched the gun, they immediately know they have to get the nail polis that creates the batches they need. While they are annoyed by the fact she felt the weapon, they also know that she is trapped. They know they have to get the nail polish somehow. Although she manages to get recognized for a good deed, by feeling the need within the church to get some underserved women should feel good about themselves—missionary workers. To steal the product, she has to enlist Sara as an accomplice to take the nail polish. They will now pin the crime on the ladies who got some mani/pedis out of the day.

Under pretenses, Annie gets Gregg to come over, and he asks her what made him choose her. Upon discovering his reason, she falls back into old patterns. Thankfully, Gregg does not allow her to destroy the progress she’s working toward nor his marriage. Beth’s marriage, however, is looking to be on a bit of shaky ground more so than usual. As they are getting ready for Dean’s big night, this is the exact moment when the sniper calls to set up killing Rio. He is going through his calendar on his phone, trying to set up a time. Setting the day up for execution, we cut back to Dean receiving his award.

Instead of going back home, he goes back to the shop. He ends up talking to Gayle to find out that she has a rather bleak home life. Deans admits to her when she shows a vulnerability that he doesn’t view her as a monster. Although he falls into a kiss with her, viewers can see the hesitation there. Were you yelling at your television too when this occurred? When he tells Beth that he quit his job because he kissed Gayle, we see another side to Dean. A side we would not have seen in season one. An admirable side we needed to see, and so did Beth.

Dean admits the reason he stopped is that Gayle is not one he wants. He wants Beth. Dean wants his wife. And because of his track record, he doesn’t expect her to believe him. Dean even offers to go to his mothers if that is what she wants, but Dean wants to stay. When she doesn’t say anything at first, he picks up his bag. She calls him back and asks him not to go. I think Beth wants her life to go back to normal. If not, she would not have told Rio at the end of the episode she felt incentivized. However, her climb uphill is going to be his downfall.

Meanwhile, Annie finds herself talking about sex with Dr. Cohen and manipulating him. Any progress I’ve felt she had made this season seems gone somehow at this moment, which is a pity. This moment is not even the worst in the episode, however. Agent Donnegan now has narrowed down a location thanks to the theft of the nail polish. Will she be able to connect them, or will another worker, in this case, go down for the crime? And despite Beth supposedly playing nice, will Rio get word of her lies and make her pay first? Only time will tell now.

What did you think of tonight’s episode of Good Girls? Did Dean do the right thing quitting his job? Should Stan get to be the criminal every now and then? Will killing Rio get botched again somehow? Will Agent Donnegan get further capturing the girls? Will she mainly be lead to Ruby since she is the one who stole the nail polish? Did Annie go too far with Lila to manipulate Dr. Cohen’s feelings? Let me know your thoughts on tonight’s episode below.

Better yet, make sure to tune into Good Girls on NBC next Sunday at 10 pm EST to see what our ladies are up to again.